As easy as a ribbon, a bracelet, and a bell

While Zachary observed his Gobbi mobile recently, I realized that from one day to the next he had started moving his arms. These movements weren't the reflexive jerks of a newborn; they seemed to have a different energy and trajectory.

I mentioned this to my husband, so he decided to hold out a rattle near Zach's right arm to see what would happen. Zach flung out his arm repeatedly while keeping his eyes fixed on the rattle, and several times struck the toy, causing it to chime happily.

This discovery prompted me to introduce a Montessori hanging toy designed to support this stage of Zach's development (which started at 8 weeks). I stitched a wooden bracelet and a metal bell to a bright ribbon and hung these over Zach's activity area, rattling the bell once to show Zach what the sound was. Then I stepped back to observe.

It took him a few tries, but soon Zach was swatting at the bell with singular glee. At first the arm movements were random, but after several days they have become more purposeful, and he will routinely lay on the floor mat for 20 minutes trying to make contact with the bell. The effort he puts forth is inspiring; his entire body is involved in making his arm move.

This simple material is a powerful tool to aid the development of the will. Dr. Montessori used the word "will" to mean "I want something to happen and I have the power to make it happen". It is one of the most powerful developmental phenomena, because it is the fore-bearer to resilience, determination, and a healthy self-esteem. Think about it: How powerful is it to know that you have the power to set your mind on something and accomplish it?

With this simple material, Zach is beginning the development of his will; while the first few swats are random and not purposely meant to make the bell chime, he soon realizes that he can control when the noise is produced.

In case you're thinking "Big deal, I could teach my dog to swat at the bell", consider that (as often occurs in Montessori) the obvious purpose of the material is often not as important its developmental purpose. Yes, your dog could probably make the bell rattle, but he would want a treat or some praise in exchange. Your dog wouldn't be driven from within to hit the bell.

For Zachary, the conscious reward is the sound of the chime, but sub-consciously he is being driven to hit the bell by an unavoidable impulse that Dr. Montessori called "the inner teacher". He's not doing this for praise (as a matter of fact, young babies are immune to praise!), he's doing this for his own development.

You can't speed up the work of the inner teacher; you can only thwart it or support it. Create obstacles for your baby (through excessive swaddling, caging, etc.) and this developmental energy will be deviated into temper tantrums and regressions. Support this creative force and watch your child flourish to the peak of his potential. The choice is yours. And it's as easy as a ribbon, a bracelet, and a bell. 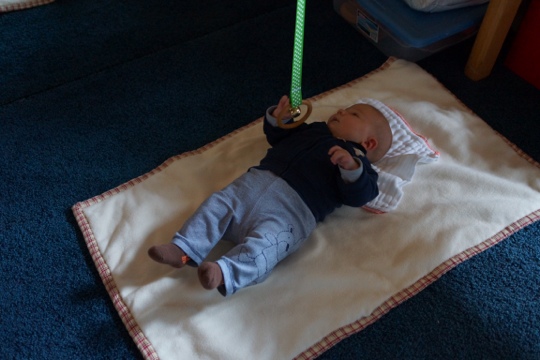 Hi there, I've come across with you blog while searching for DIY the bell on a ribbon mobile. Could you please tell me where to buy the bell? Many thanks.
Read more
Read less
Like Reply