BOTW: Kingdom of the Sun

The only thing I like more than discovering good children's books is sharing them with others.  I'm starting these "Book of the Week" (BOTW) posts to spread the joy of quality children's literature and will try to post a new book every weekend. (This post contains an affiliate link.)

"Where do the names of the planets come from?", asked 7-year-old Zachary.  I knew they were first named after Greek gods and then were changed to the equivalent Roman gods, but didn't know much else.  Then I found Kingdom of the Sun, where we learned that Aristotle, the astronomer who originally gave the planets the names of Greek gods, "did his best to match the character the gods were supposed to have with what he knew about the planets - their speed, brightness, and color." 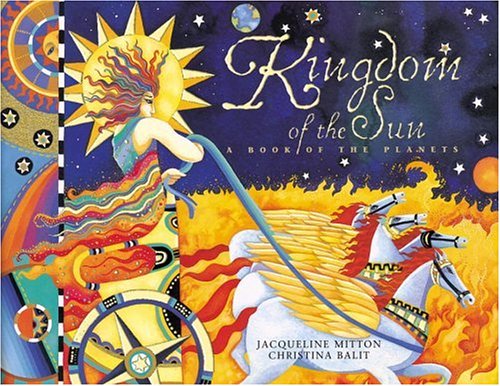 This sets the stage for the rest of the book, in which the author beautifully personifies each planet.  Thus, Mercury is "forced to lurk unseen in the dazzle of [the Sun's] brilliance" while Venus "blazes like a brilliant diamond".  Personification gives way to scientific facts, but the inspiring prose is maintained throughout the book.  The planet Jupiter, whose god persona used thunder and lightning to indicate anger, informs us that "immense electric sparks inject [his] clouds with jagged lightning."

The Sun and Moon also make an appearance, the former reminding us that his "daily sky-ride is only an illusion" and the latter describing itself as a "somber rock... transformed into beautiful shimmering silver."

The gorgeous full-color illustrations of the gods and planets have gold-foil accents and include the astrological symbols for each heavenly body.  The author's use of descriptive language is ideal for expanding the vocabulary of young elementary children (whom Dr. Montessori described as being "lovers of words").

We had a few minutes to spare before leaving for Zachary's swim practice, so I offered to read two entries.  He became so smitten with the book that we ended up reading six planet stories before getting in the car; he then begged me to take the book with us so I could read him a couple more while we waited for practice to start!

I loved the combination of mythology, science, and lyrical prose - a true collection of cosmic tales that can inspire much research and creativity.  I hope you enjoy Kingdom of the Sun as much as we have!
By Pilar Bewley
Under Favorite Books, Language Development, Montessori Theory, astronomy, elementary education, homeschool, literature, reading & Science
3 min read
Like
Share Tweet Share